Beth recently gained access to a Storycorp interview she did back in 2013. Read more about it and listen below!

“New friends and colleagues Beth Zemsky, 53, and Kierra Johnson, 36, discuss their advocacy work at the intersection of the LGBT, feminist, racial equality, and body liberation movements.” 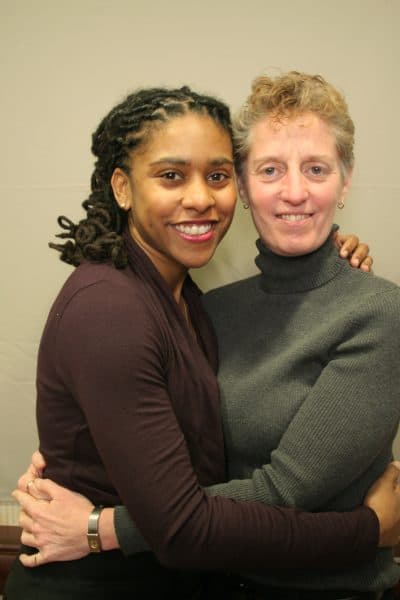 Beth started coming out in 1977 as an 18 year old in Ithaca, NY. She saw many gay and lesbian couples holding hands not knowing it related to her. She became very involved in gender/sexuality studies at Cornell University. She moved to St. Louis, MO for graduate school and suddenly her ability to live openly as a lesbian was in question. The paper Gay Community News out of Boston kept her politically involved in LGBT issues (it also formed the basis of the new National Gay and Lesbian Task Force).

Kierra attended the University of Colorado, Boulder. She was studying racial justice when her sister, Amber, became pregnant at 16. She witnessed her sister drop out of school and not receive support for her further education (Amber was sent to a “mommy school”). K realized that whatever women decide [about pregnancy/abortion] they are judged. This catapulted her into the feminist and choice/body liberation movements.

Click here to read the rest of the transcript/listen to the episode!

Sign up here for the Beth Zemsky Podcast. In episodes recorded roughly once a month, co-host Ryan Garza, various guests, and I talk about my ideas around intersectional movement building and how to make systemic change towards equity.